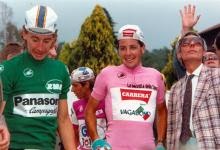 Roche's victory in the 1987 Giro was his first step in completing the Triple Crown of Cycling – winning the Giro d'Italia, the Tour de France, and the World Championship road race in one calendar year[4] – becoming the second rider ever to do so, with the first being Eddy Merckx in 1974.[5][6]
Roche took the lead of the race from Erik Breukink after Roche's Carrera Jeans-Vagabond won the stage three team time trial.[7] The defending champion,Roberto Visentini – a team-mate of Roche – briefly grabbed the race leader'smaglia rosa for a two-day period after the stage 13 individual time trial.[8] Roche then claimed the race lead from Visentini, after the mountainous fifteenth stage.[9] Roche successfully defended the overall lead from attacks from Visentini and the other general classification contenders all the way to Giro's end in Saint-Vincent.[3][5]
Stephen Roche became the first Irishman to win the Giro d'Italia after crossing the race's finish line in Saint-Vincent.[3][10] In addition to the general classification, Roche also won the combination classification.[3]