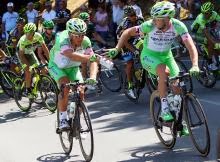 Bardiani-CSF, Colombia and YellowFluo-Neri Sottoli have been awarded wildcard invitations to the 2014 Giro d’Italia, organisers RCS Sport announced on Thursday. The three teams join Coppa Italia winners Androni-Venezuela and the 18 WorldTour teams on the start line of the Giro, which gets underway in Belfast on May 9.
All three teams were invited to last year’s Giro, but the return of Luca Scinto’s YellowFluo-Neri Sottoli team is perhaps something of a surprise. Their presence under the Vini Fantini-Selle Italia banner at last year’s race was marred by positive tests for EPO from Danilo Di Luca and Mauro Santambrogio.
Continue reading at http://www.cyclingnews.com/news/bardiani-csf-colombia-and-yellowfluo-handed-giro-ditalia-wildcard-invitations