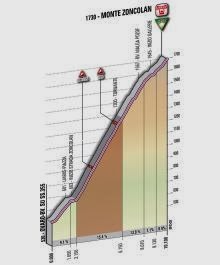 RCS Sport, the organiser of the Giro d'Italia has announced that the 2014 edition of the race will end in Trieste, in the extreme north-east of Italy, with a finish on Monte Zoncolan on the final Saturday expected to decide the final overall winner on the penultimate stage.
RCS Sport announced the Trieste finish at a press conference in Trieste and coincides with the 60th anniversary of the city returning under Italian control after the second world war. The 2014 Giro d'Italia will start in Belfast, with three days in Northern Ireland and Ireland before transferring to Italy by plane.
Continue reading at http://www.cyclingnews.com/news/2014-giro-ditalia-to-end-in-trieste